And as an added bonus, I got to play with Freddie for the first time (my new camper van). The concert was in Twickenham, so I decided to spend the weekend up there. And the fluffy purple fur and bubble wrap I used to insulate the inside worked an absolute treat.

But the concert was absolutely brilliant. I was a little concerned that they would only play their more recent stuff, which is pretty crap - and there was a quite hilarious moment when the entire stadium sat down during a particularly poor rendition of Hold on my Heart and started talking amongst themselves. But things soon picked up after that, and there was a good mixture of old stuff and some really old stuff, which kept the crowd going. Highlights included a brilliant rendition of In The Cage, the Phil Collins / Chester Thompson drum duet and a surprising yet excellent techno version of Domino.

Genesis are probably my favourite band of all-time and it was great to finally see them live. I just wish they'd do a reunion tour with Peter Gabriel and Steve Hackett... 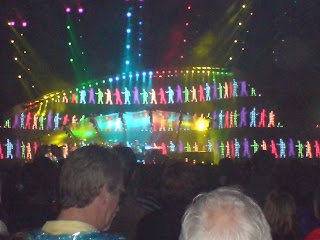 The boys in action. 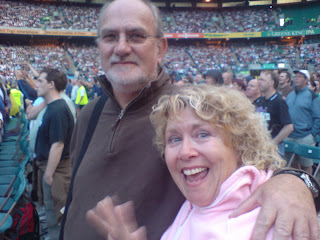 My parents rocking it large.
Posted by Chez Guevara at 1:24 pm

Hope they were a bit better than at Live Earth where, to be frank, they sucked DBs. Who's the beardy guy who does all the difficult guitar solos?

I didn't see them at Live Earth, but from what I gather, they played stuff from the Invisible Touch album. Which was pretty pants, to be fair.

The guitarist is Daryl Stuermer, who's played with Genesis on tour for 30 years.

How many drugs had Auntie Kath had by this point, may I ask?