The Russians have radioactive sushi to kill their dissidents... The Americans have invented a life-sized robotic fly for use in military surveillance. In England, we've grown up with James Bond and Q, the technical genius behind many a great invention. What are the real-life Q's in Millibank up to? What innovations is our great nation creating to counter the threat of global terrorism and to help Our Boys (TM) in their fight against local insurgents in Iraq and Afghanistan?

British forces in Basra are currently at the centre of a storm, accused of introducing man-eating badgers into the local city to sow panic into the locals.

UK military spokesman Major Mike Shearer has said: "We can categorically state that we have not released man-eating badgers into the area."

Makes you proud to be British. Not so much James Bond as Austin Powers, really. All they are missing are the lasers on their heads. 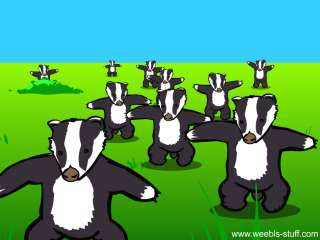 The future of counter-terrorism.


To be fair, the evidence suggests that the badgers are indigenous to the area and nothing to do with the British at all. But why let a simple thing like the facts ruin a great post?
Posted by Chez Guevara at 8:15 pm