It's a Freddie Adventure

Took Freddie off this weekend to North Cornwall for his first adventure. Despite the fact it pissed down with rain for pretty much the entire weekend, it really was rather fun. Started off on the Atlantic Highway, which is perhaps the most 'rock' name for a road in Cornwall. Even more so, as it does actually take you to Rock, the rather rah-rah posh sailing town frequented by the rich and shameless. Interesting fact: There are two villages in Cornwall called Splatt.

We camped at a layby overlooking Widemouth Bay, where we were rudely awakened at 1 in the morning by a rather damp-looking man from the council telling us we weren't allowed to stay overnight. I did manage to convince him to let us stay, after I was able to prove to him that I was actually local.

In the morning we drove down to Polzeath and spent the afternoon in the Rumps. Why are they called the Rumps? Perhaps this picture may help. 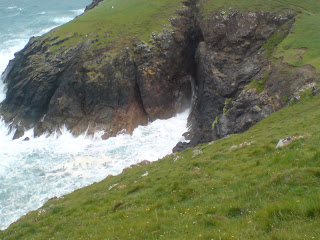 Oh no, They thought you were a Gypsy x