Had a very eventful weekend this weekend. On Saturday I drove down to sunny Camborne, where Carrie had invited some friends over for a games night. I haven't had a games night probably since Anna left England and it was great fun. Carrie had got a large whiteboard from work and Sarah brought Pictionary & Taboo. George & I just brought our incredible wit and intellects (and crisps). 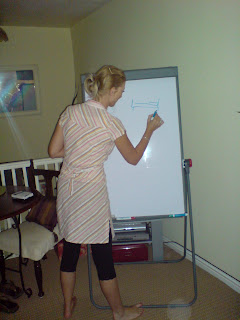 Obviously George & I were an unstoppable pictionary team as our superior drawing skills (ahem) and ability to think laterally left Carrie & Sarah a close second. Then we moved onto Taboo, which was just as much fun. Obviously your author's superior intelligence (double ahem) and cat-like reflexes meant I won, but we were all moral victors, as a great time was had by all. I'm certain we had a better time than the alternative entertainment on offer in Camborne. 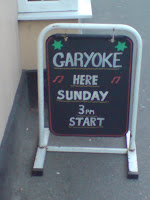 At the end of the night, I was treated to an impromptu jazz jam by Carrie and Ross with his brand new bass, before I drove on impulse to Whitsand Bay. Spent a lovely night on the cliffs, overlooking the sea.

Then back to Plymouth on Sunday morning for a 12-hour ironing marathon. I should have got sponsored.
Posted by Chez Guevara at 5:03 pm

"Garyoke"? A team of fish pulling a wagon? Gary from Muskogee (an "Oke from Muskogee")?
Is this a "real" UK variant of "karaoke" or just bad spelling?

Neither - its just a very clever and original marketing tool (ahem) used by a local guy, Gary, to promote his Karaoke night.