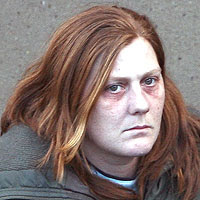 
Whilst giving evidence regarding the alleged fake kidnap of Shannon, now aged 10, Detective Constable Alexander Grummitt said he had been 'surprised' at just how ugly Karen Matthews was.

"Like everyone else, I'd seen the photos of her in the papers; but that is nothing to how she actually looks in real life. I mean look at her," he added, pointing to Matthews in the dock. "Once this case is over, there should be a criminal investigation into how she got five different men to sleep with her.

"I was thrilled once little Shannon was found, because it meant I didn't have to spend a second longer in her odious company. Frankly, even seeing her today in this court, I want to rip out my own eyes and vomit in the sockets. I mean, Your Honour - for a million pounds, would you?"

During the recess, whilst Judge Mr Justice McCombe was violently sick in his chambers, Karen Matthews' lawyer told the press:

"Look, clearly she's at the bottom of the gene pool, along with that weirdo Michael Donovan. But she didn't ask to be ugly, death-faced and a disgusting heartless slut, prepared to scar her young daughter for life for a bit of cash. I blame the makers of 'Shameless' for being bad role models." 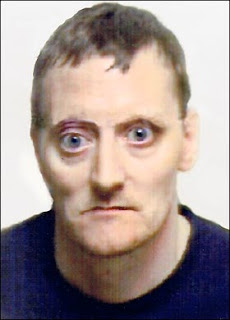 Photoshopped at birth
Posted by Chez Guevara at 6:27 pm

Labels: News according to Chez Guevara

Excellent point. I demand that her parents are brought to the courts immediately and forcibly given a vasectomy (or in the case of pitbull/Rottweiler crossbreed who signed with a pawprint on the birth certificate to indicate she was the mother, be spayed) in order to prevent such a travesty ever happening again.