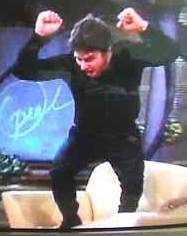 ...who thinks that the poisonous dwarf known as Tom Cruise is not only incredibly overrated as an actor, but also a rather horrible person. For years, I've never understood why people rated him. I always thought that in the main, any successful films he's been in have been despite him, not because of him.

I'm not particularly into the cult of celebrity, so in the main I have just ignored the little eejit. But his behaviour in recent times, in particular his Scientology beliefs, his overtly sexist behaviour, his public criticism of people and just general weirdness have been hard to ignore. In particular, his public attack on Brook Shields for taking anti-depressants to battle post-natal depression was frankly astonishing... Although Brooke Shields' response was simply genius:

“His comments are dangerous. Tom should stick to saving the world from aliens and let women decide what treatment is best."

And today I read that he has had his contract with Paramount cancelled! Allegedly, the wife of the studio boss (who is some 40 years his junior, so you figure out how she did it) convinced the boss to drop the mysogonistic little freak. Great news for the world in general, as yet another arrogant, controlling, preaching little shit finds out they're not as untouchable as they thought they were. I doubt we'll be lucky enough that this will be the end of Tom Cruise... But it's a start.
Posted by Chez Guevara at 11:35 am