A family on holiday in Australia for a week and a half when husband, wife and their 15 year old son decided to go scuba diving. The husband is in the navy and has had some scuba experience. His son wanted a pic of his mum and dad in all their gear so got the underwater camera on the go.

When it came to taking the pic the dad realised that the son looked like he was panicking as he took it and gave the "OK" hand sign to see if he was alright. The son took the pic and swam to the surface and back to the boat as quick as he could so the mum and dad followed to see if he was OK. When they got back to him he was scrambling onto the boat and absolutely shitting himself.

When the parents asked why he said "there was a shark behind you" and the dad thought he was joking but the skipper of the boat said it was true and that they wouldn't believe him if he told them what it was. As soon as they got back to the hotel they put the pic onto the laptop and this is what they saw. 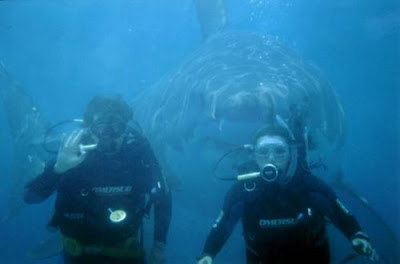