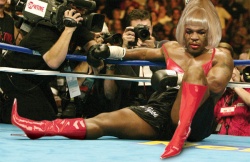 What may await you at Heidi's Stud Farm

Remarkable story about former Heavyweight boxing champion and convicted rapist Mike Tyson. Apparently, he's been approached by Hollywood Madam Heidi Fleiss to work as an escort in her brothel. Prostitution is legal in Nevada and she has opened a legit escort firm called 'Heidi's Stud Farm'. It would appear that Iron Mike is to be her prize 'stallion'. According to Helen:

"I said, `You`re going to be my big stallion.` He said, `I don`t care what any man says, it`s every man`s dream to please every woman ... and get paid for it.` And it`s every man`s fear that their girlfriend will go for Mike Tyson"

...the New York Daily News quoted her as saying. And it would appear that women are not put off by his conviction for rape and general mysogeny; apparently she's being besieged by letters, telling her to hurry up and get him on the farm.
Posted by Chez Guevara at 1:17 pm

And it`s every man`s fear that their girlfriend will go for Mike Tyson - yes I've been quite worried about that....

Chez - great work on the photo!

I hope he suffers from impotence... Grrrr... Then he can BE a useless prick as well as own one.

Carrie, I think it's common knowledge that he "went soft" a long time ago....!! Grrrrrr.