From [Adult Swim]'s Modern Toss.
Posted by Chez Guevara at 1:07 am 1 comment:

I can do woodwork, me!

Fr-fr-fresh from my art exploits of last week, I've been getting into a bit of woodwork too. I made this for my friend's 30th birthday. It's a clock, made out of driftwood and slate, all of which was collected from Wembury Beach. And I stuck 3 starfish on it, because it was her 30th. The starfish were already dead before I stuck them on. 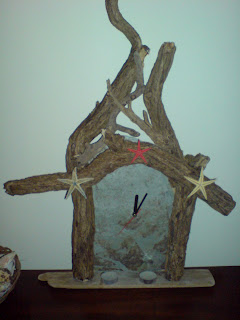 Posted by Chez Guevara at 5:20 pm No comments:

May I introduce you all to Freddie... 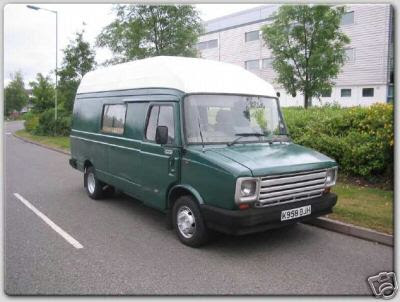 My new camper van! Named after the character in The Italian Job, he's a big green camping machine. I sense a whole Summer of fun and freedom approaching. Anyone care to join me?
Posted by Chez Guevara at 4:40 pm 3 comments:

Two budgies sitting on a perch. One says to the other: "Can you smell fish?"
Posted by Chez Guevara at 11:52 pm 3 comments:

The Stuff of Nightmares 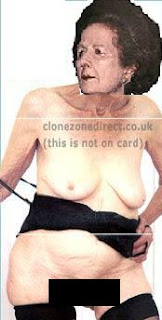 Is this the most hideous image on the internet? I think only the same picture WITHOUT the black boxes could possibly be worse. I received this picture from an old friend who works in the marketing department of Benetton, and it's saying something if even they found it too extreme.

Oh alright, I made that last bit up. The truth is, I just found it in My Documents, and I have no idea why I did it. Unless it was when I was trying to invent the world's best contraceptive. And perhaps most disturbing of all, I simply named the file 'Gran'. 50 bonus points go to anyone that can come up with a valid reason as to why I did this, which will not involve years of therapy.
Posted by Chez Guevara at 10:25 pm 6 comments:

Having done bugger all in the way of art for the last 20 years or so, I've just finished my second painting in a week. I'm getting quite into this painting business. I feel quite the creative. I've sent my novel to an agent (who still hasn't replied - bastard) and I'm now also an artist. I wonder which will come first, the Turner Prize or the Booker Prize... 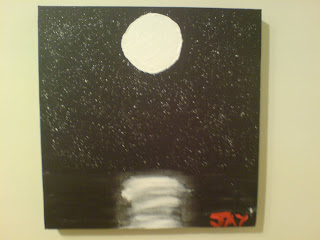 Game of Cluedo, anyone? 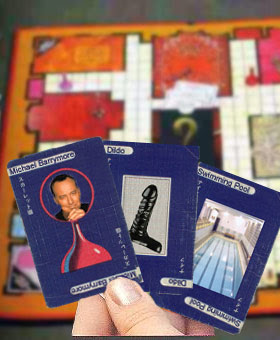 Posted by Chez Guevara at 4:10 pm No comments:

Barrymore has decided to never do panto again. When asked why, he said it's because he did Alladin about 6 years ago and has never heard the last of it.
Posted by Chez Guevara at 10:53 am 1 comment:

Decided to have a go at a bit of art tonight. First time I've ever properly painted a picture since I was about 12. And I was quite excited by it all, to be honest. Having written the book, this was the next thing to see if I was any good at - and although I don't think this is going to win the Turner Prize this year, I like it. I definitely think this is something I'll be having another go at again. 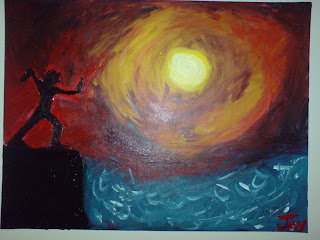 Tai Chi Sunset
Posted by Chez Guevara at 12:30 am 4 comments:

I've just joined the Samaritans. I started my training last night. It's something that I've wanted to do for years, but general terror has stopped me doing it. But I finally plucked up the courage to apply and after attending a couple of open days, my fear has subsided. I think it helps knowing that the training is first class - and having a good crowd to learn with. I think I was most scared I think that someone would phone up, I'd say the wrong thing and as a result, they'd do something rash - but the Samaritans don't give advice, or try and talk anyone out of anything, they just listen. In some ways that makes it easier, in some ways that makes it harder. But whatever happens, I suspect this is going to become an important part of my life.

If anyone else is interested in joining the Samaritans, drop me a line or visit their website here.
Posted by Chez Guevara at 4:39 pm 3 comments: