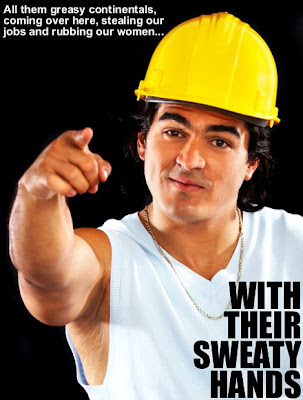 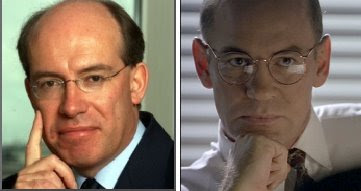 Former Chief Executive of HBOS and until recently Deputy Chairman of the FSA James Crosby and X-Files Assistant Director at the FBI, Walter Skinner. And they don't just look the same - they're both victims of hand / face superglue pranks.

I'm sure there's a joke about fucking up the country and 'the Truth is out there' or some other X-Files reference, but I can't be arsed to think one up. Just work it out for yourselves - let me know if you come up with anything half decent.
Posted by Chez Guevara at 11:36 pm No comments: 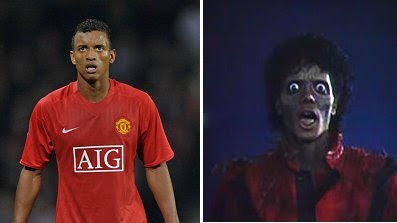 With Jose Mourinho, Sven and the Boy Wayne. This is very, very funny and well worth a watch! 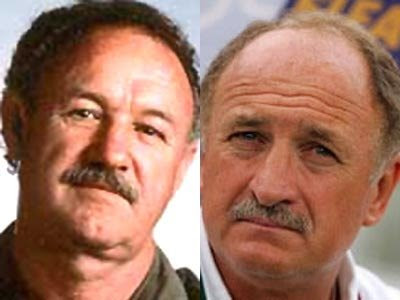 "When you've just got the sack
And you look like Gene Hack (man)
That's Scolari...."

(to the tune of That's Amore)
Posted by Chez Guevara at 12:46 pm No comments:

The Diet Coke and Mentos Display

A very close second is The Japanese Silent Library Game

But the winner of I think funniest video I've ever shown on this blog is also one of the newest - yes, it's The Holy Ghost vs Drum n Bass, God is a DJ

More Awards will follow when I can be arsed to trawl through my archives. Thanks for watching!
Posted by Chez Guevara at 12:40 am 1 comment:

Was looking back through my blog tonight with someone, which is something I actually never do. And was pleasantly surprised to find some stuff which I still find really funny. That's the advantage to having no memory - you can rediscover the same stuff over and over again, and it's always just as funny as it was the first time.

And it got me thinking - I've now done almost 600 posts over the last two and a half years. Sometimes I've been prolific; other times I've been sporadic. But why not have a round-up so far, for those that can't be arsed to wade through nearly three years of my rantings and ravings?

A bit like those never-ending "I remember" programmes that they seem to loop on Channel 4, but with fewer references to spacehoppers and long-forgotten sweets. Talking of which - someone bought me Space Dust last week. Space Dust! Although it was called something weird like Crackle Whizz or something. But I digress - and I promised no references to sweets.

No, perhaps let's not do it like those programmes - let's do it Oscar stylie. Grand and, erm, grandiose. Probably. Let's start with Chez's Favourite Videos...
Posted by Chez Guevara at 12:31 am 1 comment:

Oldie but a goodie!

Posted by Chez Guevara at 12:31 am No comments:

Posted by Chez Guevara at 12:09 am No comments:

Is this video the funniest thing I've ever seen? It's close, very close. I can't think of anything that I've laughed at more than this for a long time...

If you get this via the email, you're going to have to go to the site to see it! www.chezguevara.com. I promise you, it is worth it.
Posted by Chez Guevara at 11:41 pm No comments:

The Best Complaint Letter of All Time?

I love the Virgin brand, I really do which is why I continue to use it despite a series of unfortunate incidents over the last few years. This latest incident takes the biscuit.

Ironically, by the end of the flight I would have gladly paid over a thousand rupees for a single biscuit following the culinary journey of hell I was subjected to at the hands of your corporation.

Look at this Richard. Just look at it: 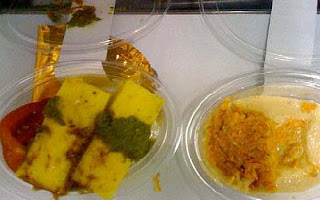 You don't get to a position like yours Richard with anything less than a generous sprinkling of observational power so I KNOW you will have spotted the tomato next to the two yellow shafts of sponge on the left. Yes, it's next to the sponge shaft without the green paste. That's got to be the clue hasn't it. No sane person would serve a desert with a tomato would they. Well answer me this Richard, what sort of animal would serve a desert with peas in: 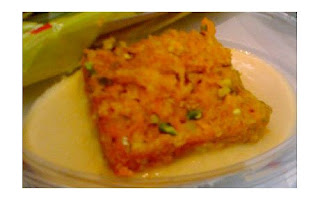 I know it looks like a baaji but it's in custard Richard, custard. It must be the pudding. Well you'll be fascinated to hear that it wasn't custard. It was a sour gel with a clear oil on top. It's only redeeming feature was that it managed to be so alien to my palette that it took away the taste of the curry emanating from our miscellaneous central cuboid of beige matter. Perhaps the meal on the left might be the desert after all.

Anyway, this is all irrelevant at the moment. I was raised strictly but neatly by my parents and if they knew I had started desert before the main course, a sponge shaft would be the least of my worries. So lets peel back the tin-foil on the main dish and see what's on offer.

I'll try and explain how this felt. Imagine being a twelve year old boy Richard. Now imagine it's Christmas morning and you're sat their with your final present to open. It's a big one, and you know what it is. It's that Goodmans stereo you picked out the catalogue and wrote to Santa about. 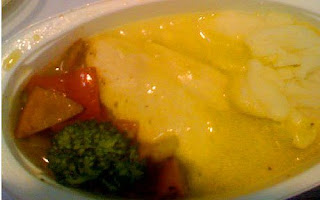 Now I know what you're thinking. You're thinking it's more of that Baaji custard. I admit I thought the same too, but no. It's mustard Richard. MUSTARD. More mustard than any man could consume in a month. On the left we have a piece of broccoli and some peppers in a brown glue-like oil and on the right the chef had prepared some mashed potato. The potato masher had obviously broken and so it was decided the next best thing would be to pass the potatoes through the digestive tract of a bird.

By now I was actually starting to feel a little hypoglycaemic. I needed a sugar hit. Luckily there was a small cookie provided. It had caught my eye earlier due to it's baffling presentation: 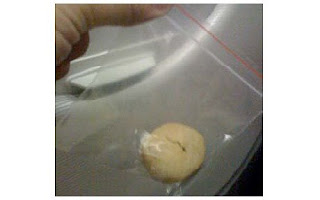 It appears to be in an evidence bag from the scene of a crime. A CRIME AGAINST BLOODY COOKING. Either that or some sort of back-street underground cookie, purchased off a gun-toting maniac high on his own supply of yeast. You certainly wouldn't want to be caught carrying one of these through customs. Imagine biting into a piece of brass Richard. That would be softer on the teeth than the specimen above.

I was exhausted. All I wanted to do was relax but obviously I had to sit with that mess in front of me for half an hour. I swear the sponge shafts moved at one point.

Once cleared, I decided to relax with a bit of your world-famous onboard entertainment. I switched it on: 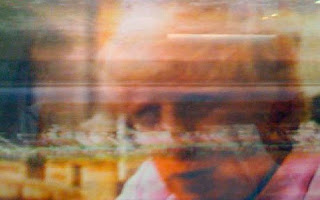 I apologise for the quality of the photo, it's just it was incredibly hard to capture Boris Johnson's face through the flickering white lines running up and down the screen. Perhaps it would be better on another channel: 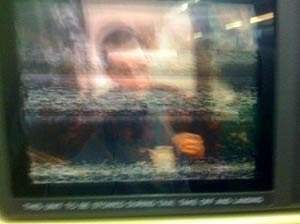 Is that Ray Liotta? A question I found myself asking over and over again throughout the gruelling half-hour I attempted to watch the film like this. After that I switched off. I'd had enough. I was the hungriest I'd been in my adult life and I had a splitting headache from squinting at a crackling screen.

My only option was to simply stare at the seat in front and wait for either food, or sleep. Neither came for an incredibly long time. But when it did it surpassed my wildest expectations: 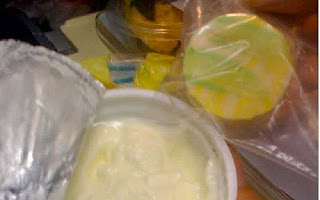 Yes! It's another crime-scene cookie. Only this time you dunk it in the white stuff.

Richard.... What is that white stuff? It looked like it was going to be yoghurt. It finally dawned on me what it was after staring at it. It was a mixture between the Baaji custard and the Mustard sauce. It reminded me of my first week at university. I had overheard that you could make a drink by mixing vodka and refreshers. I lied to my new friends and told them I'd done it loads of times. When I attempted to make the drink in a big bowl it formed a cheese Richard, a cheese. That cheese looked a lot like your baaji-mustard.

So that was that Richard. I didn't eat a bloody thing. My only question is: How can you live like this? I can't imagine what dinner round your house is like, it must be like something out of a nature documentary.

As I said at the start I love your brand, I really do. It's just a shame such a simple thing could bring it crashing to it's knees and begging for sustenance.

Yours Sincererly...
Posted by Chez Guevara at 7:50 pm 4 comments: