So it's over and the free world is safe. Yes, Nick Griffin's appearance on Question Time has passed without major incident and we've all managed to avoid catching Fascism. 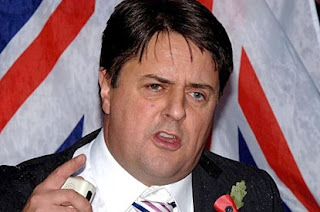 It was an interesting set-up; three heavyweight politicians on one side, then Nasty Nick and Bonnie Greer on the other. Personally, I thought the Beeb and DD handled it as well as they could have done. Yes, the vast majority of the programme was about the BNP - but it would have been a nonsense for it not to have been, particularly bearing in mind the publicity of the last week or so.

I was nervous beforehand; I was concerned that Nick Griffin's tub-thumping, martyr-like rhetoric, coupled with a witchhunt from the audience and the panel, would play right into the BNP's hands as the anti-establishment hero of the disaffected and disillusioned.

Instead, I think that Griffin was given the opportunity to voice his views, but that he was given a sound hiding, not just by the panelists, but by the audience too. In fact, I don't think that Griffin did that well at all. He came across as shifty, unpleasant and rather lightweight.

There will be plenty of comment made in today's papers about the debate; Hardcore BNP followers will say he was ambushed, 5 against 1. Most people will say he didn't come across very well at all. He made the odd point, but that was not a performance to 'propel the BNP into the big time'.

However, I thought the most interesting point of all came in the treatment of Griffin from the panelists; the three politicians (Jack Straw, Baroness Warsi & Chris Huhne) were aggressive in their attacks. They were all strongly worded and hard-hitting to greater and lesser effect. But I thought Bonnie Greer had the best approach to Griffin - using humour to make the point of how irrelevant and wrong his party is. And of all the panelists, I felt that he was most uncomfortable with this approach. Fake grins and laughter were all he could manage.

Because that's it, really - Nick Griffin is like a 5-year old child with ADHD - he demands attention, good or bad. To be attacked on all sides by these political heavyweights means that he is being taken seriously by the three major parties - and that falls right into his lap as the anti-politician, voice of the silent majority that he so likes to play; however, to be mocked and ridiculed means that he isn't being taken seriously. Bonnie Greer ran rings round him tonight, and he came across as a naughty schoolboy.

So that's how we should all play it - the more we keep going on about the BNP being a serious threat, the more likely it is going to be. Personally, I agree with Bonnie Greer - no matter what the BNP might think, the British people have far too much common sense. Now, Griffin, get back on the naughty step where you belong.
Posted by Chez Guevara at 2:43 am 3 comments:

Fantastic story in the news today with the BNP being told it must allow black and asian Britons into the party, following a court case brought by the Equality and Human Rights Commission. Of course, the likelihood of any black and asians Brits wanting to join the party is pretty slim - but I think they're missing a trick.

If I were black or asian, I'd be rounding up as many hard bastards as I could, telling them all to join. Then, every time the BNP has any kind of gathering, I would ensure that we all are present, right at the front. I would love to see Nick Griffin give one of his trademark racist speeches in front of 500 bad motherfuckers.

Actually, that really isn't that bad an idea. I have no idea how many voting members are in the BNP. But I bet if a prominent non-white personality got involved - someone like Shami Chakrabarti, for example - and say she said "Right! Everyone who is against the racism of the BNP - join the party." And say they did. And then, say, she caused a vote of no-confidence in Nick Griffin... I think it's fair to say that it would be rather interesting to say the least.

It actually just needs one person to be the focal point for this. Just one person to take a stand... Damn, I wish I were black and famous. I'd be a shoe-in for next year's Nobel Prize.
Posted by Chez Guevara at 12:58 am 1 comment: