The Five Stages of Grief

BRAZILIAN superstar Kaká has called off a move to Manchester after his agent finally said the word 'City'.

The AC Milan striker was furious claiming he had been duped into believing he was going to sign for a proper football team that had won a major trophy since he was born. Kaká said last night:

"My agent called last week and said that Manchester were interested in me. I was so excited at the thought of all those great players, the traditions, the best coach in the world, and of course Gemma Atkinson's magnificent charlies. I packed an overnight bag and we went to the airport, but as we were walking through the terminal my agent turned to me and said 'oh, in case I didn't mention, it's Manchester City.'

"I stopped dead in my tracks and said, 'are you having a laugh? Seriously, is this some big fucking joke?'. He said to me, 'don't worry, they're a really big club with loads of money. And then there's Mark Hughes'.

"I said, 'I already play for a really big club, I've got loads of money and what, in the name of God, is a 'Mark Hughes'?'

He added: "I walked away shouting, 'go and get me a proper deal from a proper English club that does not include the word 'City'. No Hulls, no Birminghams, and no fucking Stokes!'"

Manchester City said last night they still hoped to complete the deal if they can persuade Cristiano Ronaldo to sign for the club and act as Kaká's butler.
Posted by Chez Guevara at 1:48 am No comments: 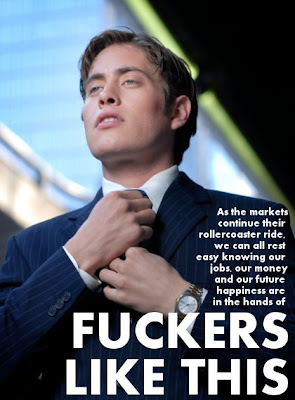 Another Firm Bites the Dust

I heard on the news today that Pedigree Chum is the latest firm to find themselves in trouble as a result of the Credit Crunch. Apparently, they've called in the Retrievers.
Posted by Chez Guevara at 3:02 pm 2 comments: