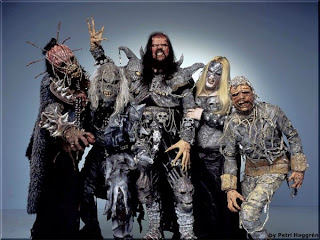 Sadly, I am going to a charity ball on the Saturday night, so it won't be live. But I will record it and run the party the following night. (Don't spoil it by watching it the night before - you will ruin the *ahem* magic).

There will be a sweepstake between all those that participate and whoever wins can add the total raised to their 100 Club target. All money raised goes to the Plymouth Samaritans.

Tickets to the sweepstake cost £5 each and there are 25 countries taking part this year. If we can find 25 people, each willing to pay to £5 to take part, that will raise £125. Your country will be chosen at random, from a hat.

If you are sadly unable to make the party, you can still take part - £5 buys you a sweepstake ticket!

Camper than Graham Norton in a tent, watching the annual Shirley Bassey impersonation competition on TV (held on a campsite), can you afford to miss Terry get progressively more drunk and raucous on (nearly) live TV? Can you afford to miss the German entry? Will the UK win (or get any votes)? Will Norway get 'null points' again? Will you manage to get through the night without biting off your own ears?

The party will take place at my house (please email / phone for details) just round the corner from the Thistle pub and will start at 7:30pm.

Bring your own drink - you'll probably need it. I will provide nibbles and ear plugs on request.

Please let me know ASAP as to whether you would like to attend / buy a sweepstake ticket.
Posted by Chez Guevara at 1:46 pm No comments:

Regular readers of the White Spirit will know that I take part in a family Fantasy Football tournament each year. After a disappointing first season with Obi-Wan Kenobi Nil, I had high hopes for my boys this season.

And to be fair, after a rather ropey start, they did pull it together. Although sadly, I think the headstart I gave the leaders was too much to make up at the end, but a rather respectable 7th was not too bad at all. That's probably an Intertoto place, which I'm happy with. I am unofficially the Aston Villa of the Fantasy Football league. 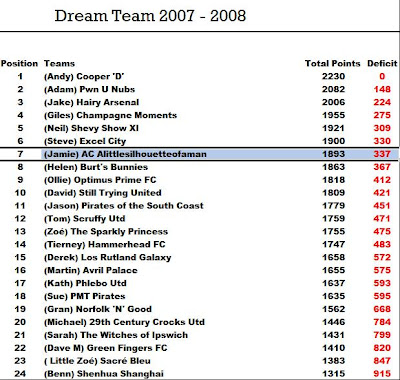 Next year will be different, oh yes. I'm going to break the stranglehold of my dad's reign of terror. Oh yes. Just you wait til next year - it's only a matter of time, bwa ha haha etc.

Oh, and it was good to see Tafkass just about scrape himself out of the relegation places this year in 20th place, one place below my 85-year old Gran and three places behind my mum, who wanted to pick Gary Lineker.
Posted by Chez Guevara at 3:10 pm 1 comment:

In July 2007 I gave my annual predictions for the football season to come. And once again, it was a mixed bag of successful punditry for Chez. I predicted:

- Ipswich to finish top half of table, but to miss out on play-offs.
Correct, and it was a difficult season. Invincible at home, pile of shit away, at least we were consistent. But now we have a new owner, we'll be expecting a much better return next season. Playoffs will be a minimum, with automatic promotion the target.

- Sheff Utd, Cardiff & West Brom to be promoted.
1 out of 3. West Brom promoted as champs, but Sheff Utd and Cardiff missed out.

- Inter to win Serie A, Juve 2nd, Meeelan 3rd
Looks like Inter are going to win the league, but Roma are the team hot on their tails. Juve are third and Meeeelan are currently languishing in fifth with one game to go.

- Barcelona to win la Liga, Madrid to finish 2nd or 3rd
Incorrect - Madrid have been great this year and Barca have struggled.

- an English team to win the Champions League, most likely Manchester United
Correct, but we'll see whether it's United on Wednesday.

- England to not qualify for Euro 2008, McClown to be sacked.
Correct. And I predicted that Capello would be made coach.

So all in all, not a bad return.

Right:
- Ipswich finished top-half of the table, but just missed out on the play-offs.
- West Brom promoted to Premiership
- Man United won the Premier League
- Chelsea finished close second
- Birmingham & Derby relegated to Championship
- Inter won the Scudetto (although it was closer than it should have been)
- Meelan struggled with a lack of strikers
- England failed to qualify for Euro 2008
- Steve McClown got sacked
- Fabio Capello took over as England Manager.
- An English team to win the Champions League (I said probably United - we'll see on Wednesday)

Wrong:
- Sheff Utd and Cardiff did not get promoted to Premier League
- Liverpool came 4th, not 3rd; Spurs didn't make top 4
- Wigan did not get relegated
- Juve finished 3rd, not 2nd. Meelan did not finish 3rd.
- Madrid won the Spanish League, not Barca

In the main, I think that's more right than wrong so I'm happy with that. I will let you know my predictions for the new season in August. And maybe this time, I might actually put my money where my mouth is!
Posted by Chez Guevara at 2:36 pm No comments:

A Joke about Snoop Dogg Part 2

Apparently, Snoop Dogg has also decided to do an Austrian tour, fo' schnitzel.
Posted by Chez Guevara at 12:26 pm No comments:

Fuck My Hat! I Never Knew That!

I thought Soft Cell did the original. But apparently it was Gloria Jones in 1964. 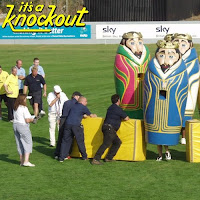 Roll up, roll up! Who fancies It's a Knockout? It's on the 12th July in Plymouth and is going to be supporting the Plymouth Samaritans. It's in teams of 10, so I'm looking for up to 50 people (well, 49 cos I'm doing it) to take part. It's going to be an amazing event and a hell of a lot of fun. If you fancy dressing up as a penguin or a giant king or some other such acid-fuelled madness, then drop me a line.

The only proviso is that you have to raise £100 sponsorship for the Samaritans. I can send you all the paperwork you need, including a sponsorship form etc. But it's for a great cause, and you'll have the best time you can have with clothes on.

Alternatively, if you don't want to take part, does anyone want to sponsor me? All donations gratefully received!
Posted by Chez Guevara at 1:26 pm No comments:

www.hundredclub.co.uk
Posted by Chez Guevara at 2:12 pm No comments:

Supporting The Samaritans - Join The 100 Club!

As some of you may know, I'm a Samaritan volunteer in Plymouth. The Samaritans does an amazing job helping people that are feeling distressed or suicidal. But the branch is totally self-funded and relies 100% on fundraising to continue offering the essential support it offers to its callers.

However, the Plymouth branch of the Samaritans is currently operating at a loss, despite the fact that everybody in the branch is an unpaid volunteer. In fact, last year the branch as a whole brought in less than £20,000 for the entire year.

As a result of that, I've launched a fund raising initiative called The 100 Club. The aim of the Club is to get 100 or more members to each raise £100 for the Samaritans. I'm going to be arranging sponsored events during the year which you can take part in - or alternatively, you can fly solo and run your own thing.

Whatever you choose to do, if you raise £100 for the Samaritans, you're in! You become a bona fide member of The 100 Club. Members receive:
- Official 100 Club Certificate, stating how much you raised;
- Goodie bag of Samaritans stuff
- Free ticket to The 100 Club Annual Awards Ceremony.

The Annual Awards Ceremony will be a black tie event, held at a top venue in the South West and will be FREE to anyone that has raised the £100 needed to join The 100 Club.

More information can be found by going to www.hundredclub.co.uk. Alternatively, you can email me or ring me on 01752 253 950!

Thanks for your time!
Posted by Chez Guevara at 1:57 pm No comments: