MILLIONS of children are waking up this morning drenched in sweat and urine following the unveiling of the London 2012 Olympic mascots. 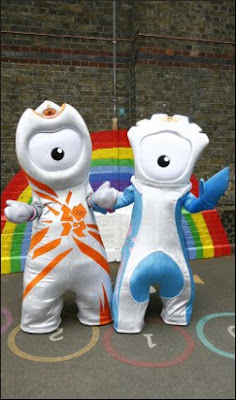 They smell of whisky and feast on tongues

Wenlock and Mandeville were greeted with a chorus of blood-curdling screams as onlookers trampled each other in a desperate bid to escape.

Meanwhile London mayor Boris Johnson insisted the mascots encapsulated the spirit of the city before kneeling down in front of them and begging for his life.

Emma Bishop, a mother of two from Finsbury Park, said: "The names sound like a pair of prostitute-murdering opium addicts from the 1880s and they look like the Tellytubbies' abusive uncles.

"What we've got here is two giant, damaged teeth, each with a massive, psychotic eye and razor sharp claws. And the blue one seems to using bright, friendly colours to draw attention to his genital area.

"So these things - designed specifically for children - are basically lobster-clawed pervert monsters that remind them of the dentist. Bravo."

Helen Archer, a mother of three from Hatfield, said: "So the next time my five year-old loses a tooth and I tell him to put it under his pillow for the tooth fairy he will scream in terror and tell me it will grow into Wenlock and eat his head like it was a Malteser.

"I honestly can't believe I'm saying this, but Adrian Chiles is no longer the most disturbing thing to appear on The One Show."

Cowering behind the television with a jumper over his head, Archer's seven year-old son Jake added: "Leave me be Mr Mandeville. I'll be a good boy, I promise I will."

The mascots were developed by the sinisterly-named children's author Michael Morpurgo who conducted focus groups across the country to boil down childhood terror to its elemental form.

He said: "We initially thought of using those silent, floating zombies from Buffy The Vampire Slayer but Wenlock and Mandeville have the added bonus of looking like they could suddenly appear inside a pencil case or at the bottom of a Happy Meal."

From The Daily Mash
Posted by Chez Guevara at 1:24 pm No comments:

In political news, I see that Labour backbencher Jon Cruddas has ruled himself out of the leadership race. On the same premise, I'd like to point out that after serious consideration, I am also not interested in entering into a relationship with Cheryl Cole. 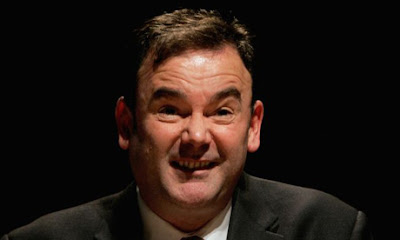 We both agree she's a horribly violent racist who looks like a very realistic sex doll.
Posted by Chez Guevara at 10:49 pm No comments:

Spam is getting increasingly more surreal 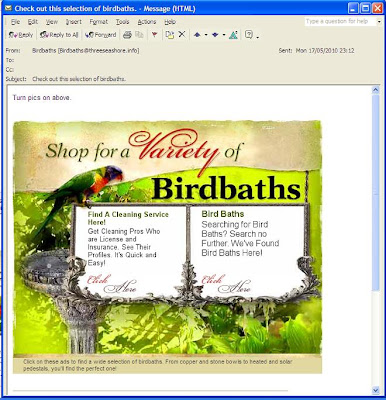 Posted by Chez Guevara at 10:47 pm No comments:

I want to be a Scientist 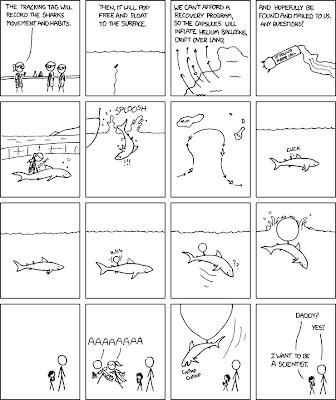 Posted by Chez Guevara at 12:44 am No comments:

The Dark Side of the Force

Posted by Chez Guevara at 12:33 am No comments:

Summary: According to the BBC News, Clegg and Cameron gave everyone the slip on Saturday - using decoy cars and having aides tell the press they were "going home" - in order to have a private meeting, 'just the two of them.' The BBC then went on to remark on the 'personal chemistry' between the two men. What follows is the natural consequence of this story. I have serious thoughts on the UK election. This is not them. This is a work of pure fiction. I'm sure the reality was much hotter.

(Warning - not suitable for under 18. Does contain quite a lot of gay sex).
Posted by Chez Guevara at 4:58 pm No comments:

It's a little-known fact that I live my life by a moral code I like to call "What would Aragorn do?" For those that don't know, Aragorn is one of the characters in Lord of the Rings. Yes, I know he isn't real. Stop laughing. Lord of the Rings harks back to an era when honour and principles actually meant something.

So imagine if you will, the Lord of the Rings. The threat of the dark lord Sauron is evergrowing and the whole of Middle Earth stands in the shadow of Mordor... The battles are ferocious, there are losses on both sides. And then, right at the end, at the black gates of Mordor, Aragorn decides "actually, there's not that much difference between us and Sauron. We could probably work something out". They're later seen chatting and joking together, without a care in the world. Can you imagine how Frodo would feel?

And that's kind of how I feel about Nick Clegg leaping into bed with the Tories.

In the run up to the election, it wasn't easy to know who to vote for. I felt that Labour had lost their way somewhat and the country needed freshening up. However, at the same time, I knew I didn't want the Tories in. So voting for the Lib Dems seemed to make the most sense, with the hope of a Lib / Lab hung parliament that could bring about real change.

So I ended up voting Lib Dem - and in my constituency, the increased Lib Dem vote watered down the ruling Labour vote, and the Tories took full advantage and won the seat.

If I had known that the Lib Dems were going to jump into bed with the Tories, I'd have never voted for them. In fact, there's a real chance I'll never vote for them again. How many Lib Dem activists must be be recoiling in utter horror at what's transpired? THEIR party has let the Tories in? I know for one - if I'd have given up my time to canvass for them (and I did seriously consider it), I'd be furious now.

To be quite honest - I want my vote back.

One last word - Nick Clegg is playing an unbelievably dangerous strategy. Yes, I understand that Labour weren't really interested in forming a coalition. Yes, I know that the Lib Dems may soften the Tories' darker side. I even get the fact that principles without power (the default position of the Lib Dems since the 20s) is eventually pointless.

However, the Lib Dems picked up an awful lot of disillusioned ex-Blairite Labour supporters in the past election. By throwing his hand in with the Tories, all Clegg has succeeded in doing is sending those voters back to Labour in their droves.

Nick Clegg may be a man of principles. And he will get experience of government, plus the chance to actually implement the changes to this country he so clearly believes in. However, it remains to be seen how many of his supporters will feel disillusioned, lied to and utterly betrayed. I personally would never have voted Lib Dem if I'd have known that they'd end up backing the enemy. I suspect short-term power may well lead to a longer-term backlash. And for those of us that are old enough to remember the election of 1997 - the Tories know all too well what happens when the electorate feels betrayed.

I think Nick Clegg's only chance is for this parliament to run the full 5 years and hope that we've all forgotten by then. I think that a snap re-election would see a very different outcome.
Posted by Chez Guevara at 1:25 pm No comments:

I give you Data Cameron, from Star Trek.

Posted by Chez Guevara at 10:14 pm No comments: 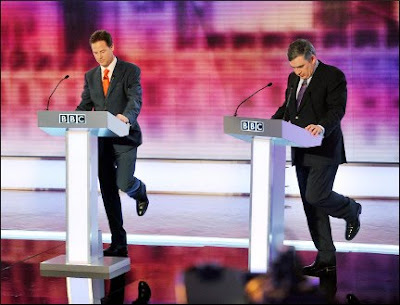 Posted by Chez Guevara at 12:35 am No comments: