Has it been worth it?

'Operation Enduring Freedom'. Remember that? October 2001, it was the name given to the invasion of Afghanistan to overthrow the Taliban. 8 years on - and after the unwelcome milestone of the 200th British soldier to die there - just how is that 'Enduring Freedom' working out?

Firstly, perhaps I need to say that I am not necessarily a pacifist. Gandhi is a hero of mine, but his policy of 'non-violence' only really works against a nation that does more or less adhere to a certain moral code. Against someone like Hitler, Stalin or even Saddam Hussein, Gandhi's actions would have been disastrous and bloody.

So I begrudgingly accept that there are times when you have to stand up and fight for what is right. Like the fight against Fascism in the 30s, which eventually led onto the Second World War, for example. That was a war that even the strongest pacifist has to concede was unavoidable.

However, is the war on Afghanistan in that category? 8 years later - 200 British deaths later - we have to look and see what have we managed to achieve there? Whenever you pay a price with the blood of your own soldiers, it is important that you know it was worth it.

And I have to say, in my humble opinion, it hasn't been.

At the start of the occupation of Afghanistan, there was a lot made about the oppressive nature of the Taliban. Particularly about their treatment of women. The removal of the Taliban was the only way to give democracy to Afghanistan, freedom to men and women throughout the country, it was said.

8 years on, it turns out that things are worse for women than it ever has been. It is now legal for a man to starve his wife if she refuses him sex. It is legal for a man to rape his wife. A woman still needs her husband's permission to work. And it is obscene that we are sending British soldiers to support that regime.

The level of self-immolation (setting themselves on fire) amongst women has never been so high as it is now. It is a sad truth that when there is no justice for women, they see no other way out than suicide.

Afghanistan is now run by Warlords, and opium production since the US occupation in 2001 has exploded. There was almost no opium produced under the Taliban, according to the UN's Drug Control Agency - now Afghanistan produces 93% of the world's opium, an increase of over 4000% by some estimates, which represents over half the country's GDP.

So what's changed? Women are still being raped, oppressed and abused. A child born in Afghanistan has a 25% chance of not making it to their fifth birthday. I would suggest for the average Afghan, not a lot has changed at all. Except now there is also war, with the poverty and destruction that brings as well as oppression.

And we have a democratic election as we speak, although it would appear that they are simply puppets of the various warlords. The names may change, but the story remains sadly the same.
Posted by Chez Guevara at 1:36 am 2 comments:

This is possibly the most beautiful thing I've ever seen. And incredibly it's from Ukraine's Got Talent. I have to say, I've never seen anything like this before and it did move me to tears*. Enjoy.

*Although that could be because I'm a big girl.

Click here to watch the video if you received this via email.
Posted by Chez Guevara at 1:21 am 2 comments: 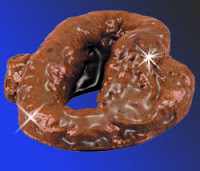 Margaret, old woman from nice place, say: "Pensioner. Me. Old lady. Fatcat greedymen. Winter so cold time. No soup. Me go all blue. Then what?"

But Tom, analysing man, say: "Pensions. That's your pension. That £3bn is where your pension comes from. Stop talking now, fucknut idiots."
Posted by Chez Guevara at 11:03 am 1 comment: