Fredzilla is now on EBay. If you would like to see how he gets on, click here: Fredzilla on EBay. 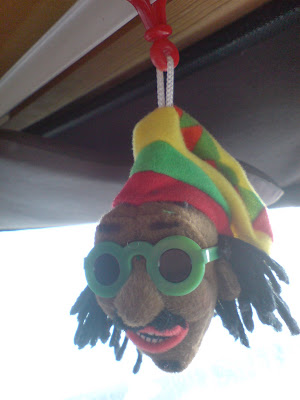 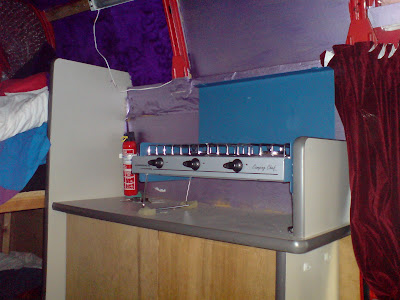 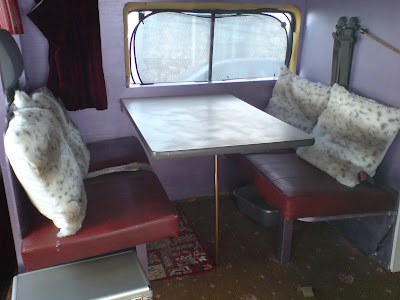 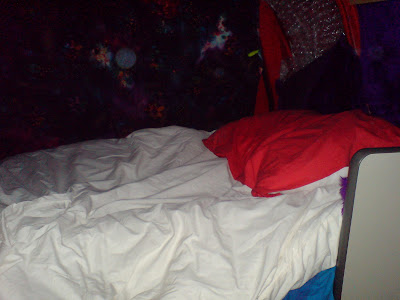 Posted by Chez Guevara at 2:27 pm No comments:

Changed since my day...

Heard on Radio 5 Live this morning that faith & private schools are 'creaming off the top pupils'. Things have changed since my days at public school. All I got were book tokens and a pat on the head.
Posted by Chez Guevara at 2:46 pm 1 comment:

So I've finally succumbed and bought myself a sensible car. Well, actually it isn't that sensible. But it's certainly more sensible than what I have been driving. Which was a Leyland Daf camper van, which I painted to look like Godzilla. His original name - Freddie, after Camp Freddie in The Italian Job - was morphed into Fredzilla after his extreme makeover (Big up to my nephew Jake for the name).

He's got a hob with gas! He's got elec-trickery! A table! Seatbelts, front and rear!A toilet! A solar panel! Cupboards! And a top notch (well, quite good) CD player! He's a 2.5 diesel and he's waiting for you... If you're really lucky, I might even throw in a stuffed penguin (Not a real one). He's done about 125k miles and he's got about 5 months MOT (I think) and 6 months tax.

He's been my main method of transport for about 8 months now and has never missed a beat. He's been all round Devon & Cornwall, I've driven him to Suffolk a couple of times without any problems.

And now for the pictures... I haven't taken any inside ones yet, but will do in the next couple of days. Ladeeees and Gennelmen, may I introduce you to Fredzilla. Yours for a grand. 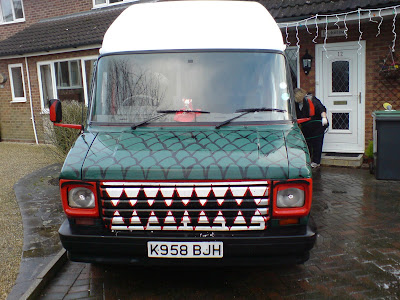 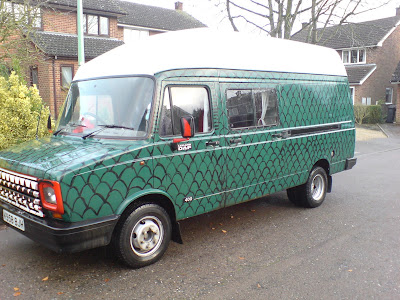 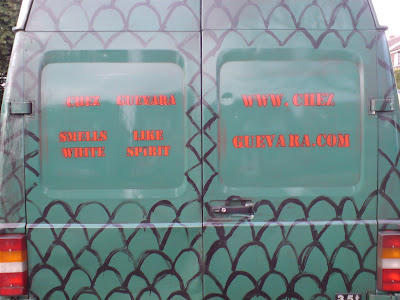 For those that get the email update, click here to watch the video.
Posted by Chez Guevara at 1:02 am 3 comments:

There are some foreign phrases, for which we have no English equivalent. A classic example is the German Schadenfreude, which means literally 'joy of harm'. No, this isn't a reference to certain German films, involving chains and an unhealthy interest in bodily fluids; instead, it's kind of enjoyment you get from seeing someone fall over - for example, 'You've Been Framed' is pure undiluted Schadenfreude.

The Italians have a phrase which I have sadly forgotten. It's something like che shemo or something. Perhaps the venerable Tafkass, over at www.verypoor.co.uk will be able to illuminate me. It's loose translation is 'what an idiot', but it's used purely to describe someone that suffers in some way as a direct result of their own stupidity. The best example of this is probably the Darwin Awards.

I am sad to have forgotten that phrase, because it perfectly describes Jeremy Clarkson. 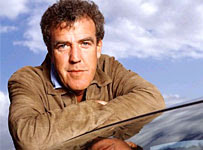 For those not familiar with his work, he's the rather brash British TV presenter of Top Gear. In his column in The Sun, he wrote about the recent Goverment scandal where the bank details of some 25 million people were sent out on a disc and lost by the Government. He stated that it was a storm in a teacup and that fraudsters could do very little with anyone's bank details. So confident was he, that he published his own bank details in the paper. He even gave readers hints as to how to find out his address.

"All you'll be able to do with them is put money into my account. Not take it out. Honestly, I've never known such a palaver about nothing" he told readers.

So, I found it hilarious when a reader set up a £500 monthly direct debit to Diabetes UK using the published details, forcing Clarkson into a humiliating climbdown:

"I opened my bank statement this morning to find out that someone has set up a direct debit which automatically takes £500 from my account" he said. "I was wrong and I have been punished for my mistake. Contrary to what I said at the time, we must go after the idiots who lost the discs and stick cocktail sticks in their eyes until they beg for mercy."

I actually don't mind Jeremy Clarkson - he can be quite funny and I think his brash, smug persona is all part of his comedy. However, I bet I'm not the only one to be thrilled that it happened to him.
Posted by Chez Guevara at 8:49 pm 3 comments:

Deadliest Virus on the Planet

I had this virus on New Year's Eve... and was lucky to escape with my life.

For email viewers, click here to watch the video.
Posted by Chez Guevara at 5:25 pm 3 comments: