The Pirate Sketch from The Million Pound Radio Show

Yes... Finally, I've found it. I've been looking for this sketch for years! You should definitely have a listen to this.

THE PIRATE SKETCH
Posted by Chez Guevara at 12:17 am No comments:

I've had a great couple of days, which climaxed in a rollercoaster birthday today. I've bought a camper van from Ebay (again. I know. Shut up.) and it's been rather an adventure.

The van - a mighty 2 litre Bedford CF2 in British racing green - was situated in Dover, so I decided to pay a visit to the mighty Tafkass in Folkestone on the way. Buoyed by my good fortune at finding a coach ticket from Plymouth to Folkestone for the paltry sum of £14, I set off on Tuesday morning in good spirits. And the good spirits continued upon my arrival in Folkestone, as we once again raped Taf's whisky collection.

Following a hearty vegetarian breakfast with the Ladies & Gentlemen of the road in Folkestone's finest Wetherspoons, we made our way to my new van. After an emotional goodbye, Taf dropped me off and I picked up my new purchase - the Baron. (so called as I will paint him red and he's empty inside).

Apart from reverse gear being where 1st gear should be (and therefore crunching the gearbox a few times on the way), my journey in the Baron was uneventful. As I reached the M25, my plan had been to drive straight home to Plymouth - but at the last minute, I suddenly decided to turn right to Ipswich instead, and make a surprise visit to my family.

Today was my birthday and it was great to spend it with my family for the first time in many years. And then finally it was time to head home - so I managed about a mile down the road before I suddenly broke down.

Oh no! The horror! For shame, to break down on my birthday! Fortunately, I'd had the foresight to also buy breakdown insurance (with my record on breaking cars and camper vans, it would be suicidal not to) so I called for help.

After the rozzers had nicely towed me off the dual carriageway (fortunately failing to see that my tax had actually run out in May - ahem), the cavalry arrived. Alas! My van was broken and he could not fix it. So he towed me back to the depot, whereupon he confirmed that I was to be towed back to Plymouth.

Down and deflated, I sat in the waiting room - another broken van. Another silly purchase. Another long journey on the back of a tow truck. Harumph. And off we set, some three hours later after I'd originally set off from my parents.

But all was not lost! The man in the van mentioned casually that my van wasn't actually broken - I'd just run out of petrol! And although we'd stuck a bit more petrol in it, the fuel pipe was just blocked with air. He'd cleared the blockage - and drove it onto the back of the tow truck. There was in fact nothing wrong with the van - he just fancied a trip to Plymouth.

Hurrah! So I saved a fair old whack in petrol home (it is a little thirsty on petrol, more thirsty than I had hoped), got back much quicker than the Baron would have done. And it doesn't need fixing.

As for the Baron - sadly, he's not quite wide enough for me to sleep in sideways, and is also a bit petrol-thirsty. So I have decided to kit him out as a proper camper van, get an MOT on him and sell him (hopefully for a considerable profit) back on Ebay.

So, all in all - I was disappointed to find out that the van wasn't really suitable for me and to break down - but all was well in the end. Let's hope that Friday the 13th is a little bit calmer than Thursday 12.
Posted by Chez Guevara at 12:20 am No comments: 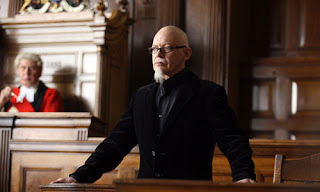 It's not that these monsters deserve to live - it's just that we mustn't descend to their level. You don't fight evil with evil.
Posted by Chez Guevara at 10:38 pm 18 comments:

Three is the Magic Number

I've finally hit the magic three weeks of not smoking, although it actually feels like three months since I stopped. But three weeks is an important moment in not smoking - it's the time when the madness finally departs, when smoking stops being an integral part of your life and when you start being yourself again.

Oh don't get me wrong, I still have the odd urge - that quiet voice in your ear, the quietest of suggestions... And perhaps that never really leaves you, I don't know. And perhaps accepting and understanding that is what will stop me from falling over again in the future. I truly hope so. But right now, I'm just happy to have my head back and myself back.

It really is quite amazing how nicotine tries to get you to fall over in those first three weeks. It attacks on all fronts and can turn the most grounded and secure individual into a gibbering, fear-driven, clingy bundle of insecurity.

I am well and truly glad to see the back of it. Here's to a smoke-free lifetime. And if I ever end up smoking again, I will cut my own cock off.
Posted by Chez Guevara at 12:41 am 4 comments:

David Cameron has called the row between Alan Johnson and the sacked Professor David Nutt an 'unseemly spat'. I haven't got anything to actually say about it - I just had to somehow crowbar in possibly the best headline in history.
Posted by Chez Guevara at 8:39 pm 1 comment: