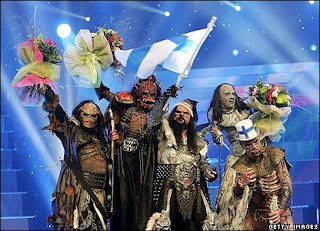 You may be surprised to know that I am an avid fan of Eurovision, in fact every year I try to throw a Eurovision Party (usually on my own, funnily enough). I absolutely love it, it's just so damn crap, it's brilliant. The increasingly drunken ramblings of Terry Wogan, the terrible songs, the bizarre slots inbetween each country, then the excitement and tension of the final votes... I do truly love it. Especially since they've introduced televoting - it means that the public gets to choose rather than the corruption and bribery method that has been rife for years. Hence the fact that Finnish monster rockers Lordi won it in 2006 (and yes, I DID vote for them).

2006 was a truly vintage year for Eurovision, in fact it was the best I've possibly ever seen. And I actually cannot wait for Eurovision 2007. Every country that takes part will see that it was the most outrageous band that won, so I fully expect the bizarre-o-meter to go off the scale in 2007. Which is why I was not surprised to hear that ex-Smiths frontman Morrissey throw his name into the hat. Maybe he can do for Eurovision what Beckham will do for American Football. I mean soccer.

I can't wait. This year's Eurovision is on the 12th May 2007. If anyone would like to join me at my annual Eurovision Party, you are more than welcome. If we get enough taking part, I will run a sweepstake.
Posted by Chez Guevara at 5:18 pm

Chez - great idea - will this be a street party? I've still got my decorated bicycle from 1977 (Silver Jubilee) which would certainly add to the high-jinx...

If I'm still in the country then, I'd love to come down for a party. If not, I'll be sitting by myself in a caravan in France, wearing some hideous green and purple lycra outfit in tribute to the contest, and miserably waving a Union Jack.

I'm gonna be there cos I aint gonna miss that one, although having said that I could actually be in your backing group Helly "do up do up wa wa" yea no worries.

Dont forget to check out Lordi's new video for
"Would You Love a Monsterman?" at: