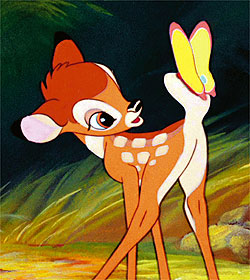 Clearly the deer was asking for it.

A man is accused of having sex with the carcass of a deer that he found lying beside the road – but his lawyer denies that he committed bestiality, on the grounds that a dead deer isn't an animal any more.

20-year-old Bryan James Hathaway of Superior, Wisconsin allegedly had sex with the deer corpse after he found it on the roadside on October 11 this year. Authorities say he told police that he noticed the deer lying in a ditch, and then moved the corpse into the woods.

He is charged with 'sexual gratification with an animal' but in a magnificent piece of legal footwork, his attorney argues that he can't be guilty of that crime, because a carcass isn't an animal.

Public defender Fredric Anderson filed a motion last week which claimed: 'The statute does not prohibit one from having sex with a carcass.'

He said that if you try to include corpses in the category of 'animals', then 'you really go down a slippery slope with absurd results.' The only clear place to draw a line in the definition of what is an animal, and what isn't, was at the point of death, he argued.

He gave the example of a roast turkey – with which it would be illegal to have sex under the braoder interpretation of the law – claiming that it was unreasonable to suggest it should still be classified as an animal for the purposes of law.

In response, prosecutor James Broughner argued that a deer carcass is still an animal – pointing out that in his statement to police, Hathaway called the corpse a 'dead deer,' demonstrating that he still thought of it as an animal.

If Hathaway is convicted, he could serve up to two years in prison, because of a previous conviction in 2005 for shooting dead a horse called Bambrick. So that he could have sex with it.
Posted by Chez Guevara at 5:52 pm

You wanted to fulfill all the criteria for offensiveness of your blog, yes?

I think you've just done it.