Cars is a bit of a Wreck 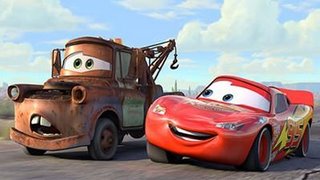 Went to see the new Disney film 'Cars' today with my nephews. Disney have been producing some half-decent stuff in recent years, but this one was pretty shit to say the least. The story itself was fairly predictable, but mainly it was too damn long. You can always tell when the kids start talking during the film.

Shame, because the ending was one of the best 'feel-good' endings that Disney have done in a long time. Just that you could easily have cut about 45 minutes out of it, and it would have been better.

A few really good moments - the pit stop by the Italian fork lift truck was hilarious, as was the little Ferrari-obsessed Fiat 126. But the rest was pretty poor, and seemed to be honest more aimed at merchandise than mirth. Shame - the actually story itself was pretty strong and the animation was good. Just could have been much, much tighter. It needed a much better script.

But was surprised to see that English hero Jeremy Clarkson had a cameo role. Perhaps less surprised to read in his column in The Sun that it was one of the funniest films ever made.
Posted by Chez Guevara at 1:44 am