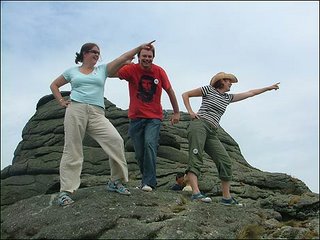 Strutting my funky stuff on telly and everything. I may look like I'm doing it wrong, I am in fact freestyling


I have goals and ambitions in life. Not your usual success / job type ambitions. Money is an illusion and work even more so. (Eh? That's a bit profound for a Sunday). More like the check list that you'll be ticking off on your death bed at the grand old age of 130... When the job you did, the money you earnt, the things you've bought no longer matter.

There are the important ethical and moral ones - did I leave the world in a better place than it was when I found it? There are the emotional ones - did I meet the girl of my dreams, or did it not quite work out how I thought it would? Did I raise my kids to respect the world they live in, am I proud of how they turned out...

And then finally there is a category I like to call 'miscellaneous'. Miscellaneous are things like 'I'd like one day to run the London Marathon' or 'I'd like one day to publish something' and things like that. You wouldn't be racked with regret if you didn't do it in your lifetime, but it would be something that if you did actually do it, that you could remember with fondness.

And this weekend, I achieved a 'miscellaneous', albeit a rather tenuous one. I was part of an event that got into the Guinness Book of Records, and I've always wanted to do that. Sadly you won't be reading 'Jamie Lee' in the book, because I was just one of 8500 other people, but I went to the largest dance class in the world at Haytor, on Dartmoor.

I did have a scare when they signed me up as a dance teacher, but thankfully I managed to blag my way out of that one... But it was a fun event nonetheless and I did meet some really nice people at the event.

I don't think I'll ever have the discipline to actually get there under my own steam. I can't see myself really going balls out, for example, to put more clothes pegs on my face than anyone else. In the words of Bill Bailey, the only thing you need to do to beat that record is just have a bigger face. But I can say that in 2006, I was in the Guinness Book of Records and that'll do for me.
Posted by Chez Guevara at 12:48 pm