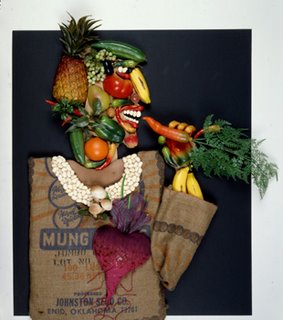 Yup. After years of deliberating and putting my head in the sand, I've finally taken the decision to go vegetarian again.

When I was younger, I was veggie for many, many years. I remember being something like 6 years old, and being horrified that the lamb on my plate was the same 'lambsies' in the fields that we would stop and look at on the way to school.

At about the same age, my school suspected that I was some kind of child prodigy, and I was made to take various intelligence tests and interviews etc. They told my parents afterwards that I was indeed highly intelligent, but a bit immature - when asked where does beef come from, I had replied 'from the butchers'. I gave the same answer for pork and lamb. My mum had to explain that it was her fault - I would always ask where the food came from, and if she said 'from a cow', I wouldn't eat it. But if she told me it was 'from the butchers', I would eat it. Strange but true.

I stopped being veggie when I was about 15. I think I lasted about 8 or 9 years up til then. And since then, a combination of laziness and an inability to cook has made me simply put my head in the sand and make a conscious effort to not think about it. Because I have always been filled with a vague sense of horror, not just at the fact that we eat meat, but also that we farm it. Indeed, most abattoirs are little more than concentration camps for cattle.

I won't deny that I will miss it from time to time. I do like the taste. But when I think about it for more than about 5 seconds, I can't help but feel that it is morally wrong. And that it is time I put my mung beans where my mouth is.

In fact, I can't help thinking that in a couple of hundred years or so, once more is learnt about the world we live in and in particular if we finally learn to properly communicate with animals, they will look back on us eating meat in the same way we now look back at colonial slavery.

But I'm not going to start digging up dead grandmothers just to save a hamster. It's a decision I've taken for my own moral reasons. I'll let everyone else make up their own mind.
Posted by Chez Guevara at 1:59 am

Good on ya, matey-peeps. Admittedly, I'm somewhat biased on the issue, but it's a brave decision to take.

Newsnight had a special on animal testing / the new lab in Oxford the other night, and I was remarking to a friend how het up people get about cruelty to pets / animal testing - when on the other hand, they completely bury their collective heads in the sand when it comes to the horrors of the meat industry. If all UK meat eaters spent just an hour in an abbatoir, I think the country would instantly go predominantly veggie.

BTW, if you carry on getting these spam posts, let me know - I'll see if I can get my Technical Monkey to lend a hand (he's a bit busy - currently doing some testing for Silk Cut).

Well done Jay!
I am weening myself off meat, very slowly. Convincing myself that its ok to eat fish and shell fish... then I see lobsters in a restaurant tank and hate myself :(

I could easily be a veggie if it werent for bacon...