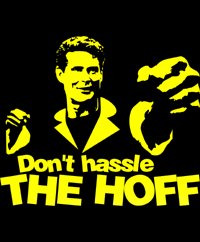 BEER-swilling Baywatch star David Hasselhoff was booted out of Wimbledon — because he was “steaming drunk”. A guard led him from the tennis tournament’s grounds after a series of clashes with security staff.

FIRST, the 53-year-old actor had a blazing row outside Centre Court. Guards would not let him in because he did not have a valid ticket. THEN he was banned from press and players’ bars as he tried to get another drink.

Hasselhoff, who has fought a long battle with booze, yelled at staff: “You should let me in. Do you know who I am? I’m The Hoff.”

I'd have given my right arm to have been there. Well, my left one at least. Perhaps a few fingers then.
Posted by Chez Guevara at 2:07 pm

I read this one in The Scum; it's your typical tabloid "mountain out of a molehill" / "careful to avoid libel" story - what probably happened in reality is that he politely asked a strawberry seller where he might purchase a drink of caffeine-free low-calorie water, but happened to be in the vicinity of a hack; hence the story's transmogrification.