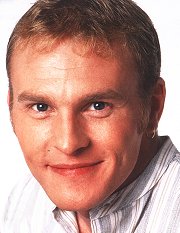 Biff from Emmerdale.
No, I didn't know who
he was either.


Went to a charidee night last night. Boy, it was dull. I went last year, it's a kind of celebrity golf thing. And there is nothing more dull than listening to celebrities share golf anecdotes. I wouldn't mind if the stories were funny, perhaps involving streakers, old ladies or leopards. But the gag is usually that they hit the ball in the wrong direction, lost their ball, or putted it in more shots than they should have done.

I don't play golf. I don't particularly like people that claim to be celebrities, particularly when you haven't heard of any of them. I sat next to Biff from Emmerdale. He was very short. The other celebrities were many and varied. There was someone who was once on Stars in their Eyes. Someone who was once on Opportunity Knocks. The bloke who used to commentate on the snooker. And various other Z-Listers.

And after dazzling us with hilarious golfing anecdotes, they then did a cabaret act... I would have chewed my own ears off if my teeth would reach. Awful. They did songs from the shows, a few comedy stints - 'Why are pirates called pirates? Because they arrrrr' - and other such joys.

So two of my pet hates - crap overinflated celebrities rubbing shoulders with puffed-up corporate tossers. I am usually easily impressed with celebrities. Until you actually meet them.
Posted by Chez Guevara at 2:39 pm

Here are some links that I believe will be interested